How Did the Universe Begin?

On March 17, 2014, astronomers announced a major discovery that provides evidence for the theory of the rapid expansion of the early universe following the Big Bang. The discovery was a predicted pattern in gravity waves in the universe Cosmic Microwave Background (CMB). It is an historic finding with many implications. The evidence seems to confirm that in one trillionth of a trillionth of a trillionth of a second after the “Big Bang” the universe expanded much faster than the speed of light. Cosmologists call this the inflationary epoch.

What is most amazing is that in that tiny fraction of a second the universe went from the size of a subatomic particle (smaller than one atom) to about the size of a golf ball. The universe continued expanding but not as fast. One second after the Big Bang, the universe was filled with neutrons, protons, electrons, anti-electrons, photons and neutrinos, according to Space.com 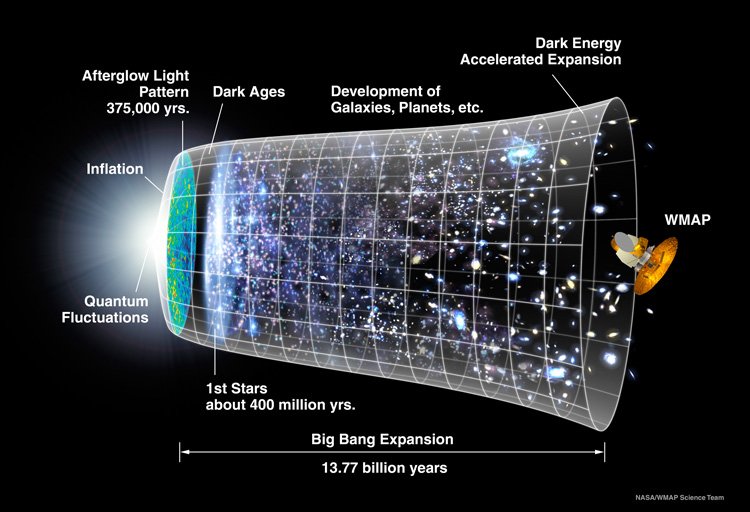 Timeline of the Universe

The timing of inflation tells physicists about the energy scale of the universe when inflation was going on. The information suggests that this was the same energy scale at which all the forces of nature except gravity (the electromagnetic, strong and weak forces) might have been unified into a single force, an idea called the grand unified theory.

What makes the discovery even more interesting is that it may also provide evidence to the possibility that there are many universes. The term multiverse is used by scientist to describe the hypothesis of multiple universes, which may exist with our universe; but possibly in other dimensions.

We have learned so much about how massive and vast our universe is; especially in the last decade with improvements in technology and instruments like the Hubble Telescope. Estimates are that our own Milky Way Galaxy has about 300 billion stars; many of them are more massive than our sun, which is nearly a million times bigger than the earth. There may be between 100 and 200 billion galaxies not to mention other things like the possibility of black holes. Now, cosmologists are saying that they have evidence the entire universe was compressed into a tiny spot of energy smaller than one atom and then in an instant space, time, and energy expanded much faster than light to create our universe.

The moment of the Creation looks like a very precise, controlled and massive event. The reason scientist came up with the theory of cosmic inflation is because the universe is relatively flat and smooth, not what you might expect from an explosion. For me, this whole discovery has God written all over it. Consider that we now have scientific proof that something exists outside of space and time, something or someone is eternal. The entire cosmic creation proclaims God in its order, beauty, and power.

The heavens declare the glory of God; the skies proclaim the work of his hands. Day after day they pour forth speech; night after night they display knowledge. There is no speech or language where their voice is not heard. (Psalms 19:1-3 NIV) 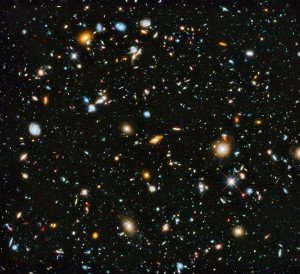 What Does the Bible Say?

In the beginning God created the heavens and the earth. (Genesis 1:1 NKJV)

The heavens declare the glory of God; the skies proclaim the work of his hands. Day after day they pour forth speech; night after night they display knowledge. There is no speech or language where their voice is not heard. (Psalms 19:1-3 NIV)

Is cosmic inflation in the Bible? There are at least four scriptures where God mentions stretching out the heavens. Each of these scriptures are in the context of Creation.

This is what the LORD says—the Holy One of Israel and your Creator: “Do you question what I do for My children? Do you give Me orders about the work of My hands? I am the One who made the earth and created people to live on it. With My hands I stretched out the heavens. All the stars are at My command. (Isaiah 45:11-12 NLT)

I will rescue you for My sake—yes, for My own sake! I will not let My reputation be tarnished, and I will not share My glory with idols! “Listen to Me, O family of Jacob, Israel My chosen one! I alone am God, the First and the Last. It was My hand that laid the foundations of the earth, My right hand that spread out the heavens above. When I call out the stars, they all appear in order. (Isaiah 48:11-13 NLT)

I, yes I, am the One who comforts you. So why are you afraid of mere humans, who wither like the grass and disappear? Yet you have forgotten the LORD, your Creator, the One who stretched out the sky like a canopy and laid the foundations of the earth. Will you remain in constant dread of human oppressors? Will you continue to fear the anger of your enemies? Where is their fury and anger now? It is gone! (Isaiah 51:12-13 NLT)

He has made the earth by His power, He has established the world by His wisdom, And has stretched out the heavens at His discretion. (Jeremiah 10:12 NKJV)

Is Multiverse in the Bible? Yes, we know that Jesus taught about the Kingdom of God and the Kingdom of Heaven. A kingdom is a domain or realm. The Bible also mentions a Kingdom of darkness. Jesus taught that there are things we can not see but we know they are there because we can see the affects, see John chapter 3. There is a spiritual realm that we cannot see with our physical eyes but we can see the affects of it. This is what science recognizes as dark matter and dark energy. Science always proves God when it is true science and not speculation. God is a God of order and He creates with order that is why science can study the creation and discover order and physical laws that govern the physical realm. The universe was obviously not created by random chance. In fact entropy (randomness, disorder) has increased from the time of creation and continues to increase.

For He has rescued us from the kingdom of darkness and transferred us into the Kingdom of His dear Son, who purchased our freedom [with His blood] and forgave our sins. Christ is the visible image of the invisible God. He existed before anything was created and is supreme over all creation, for through Him God created everything in the heavenly realms and on earth. He made the things we can see and the things we can’t see—such as thrones, kingdoms, rulers, and authorities in the unseen world. Everything was created through Him and for Him. He existed before anything else, and He holds all creation together. (Colossians 1:13-17 NLT)

For I am not ashamed of this Good News about Christ. It is the power of God at work, saving everyone who believes—the Jew first and also the Gentile. This Good News tells us how God makes us right in His sight. This is accomplished from start to finish by faith. As the Scriptures say, “It is through faith that a righteous person has life.” But God shows His anger from heaven against all sinful, wicked people who suppress the truth by their wickedness. They know the truth about God because He has made it obvious to them. For ever since the world was created, people have seen the earth and sky. Through everything God made, they can clearly see His invisible qualities—His eternal power and divine nature. So they have no excuse for not knowing God. Yes, they knew God, but they wouldn’t worship Him as God or even give Him thanks. And they began to think up foolish ideas of what God was like. As a result, their minds became dark and confused. Claiming to be wise, they instead became utter fools. (Romans 1:16-22 NLT)

By faith we understand that the universe was formed at God’s command, so that what is seen was not made out of what was visible. (Hebrews 11:3 NIV)

We know that God, who raised the Lord Jesus, will also raise us with Jesus and present us to Himself together with you. All of this is for your benefit. And as God’s grace reaches more and more people, there will be great thanksgiving, and God will receive more and more glory. That is why we never give up. Though our bodies are dying, our spirits are being renewed every day. For our present troubles are small and won’t last very long. Yet they produce for us a glory that vastly outweighs them and will last forever! So we don’t look at the troubles we can see now; rather, we fix our gaze on things that cannot be seen. For the things we see now will soon be gone, but the things we cannot see will last forever. (2 Corinthians 4:14-18 NLT)

“Worthy are You, our Lord and our God, to receive glory and honor and power; for You created all things, and because of Your will they existed, and were created.” (Revelation 4:11 NASB)