On December 13, 2011 scientist held a press conference stating that they may be getting close to detecting the Higgs boson. As I began to learn more about the Higgs boson the Holy Spirit reminded me of several scriptures that seem to relate to it, in spiritual way. I have been focused on Righteousness by Faith for some time and have been planning to write an article about that. However, I think that it is important to understand what faith is first.

I am not a scientist. I am basing the below science information on my own understanding which may or may not be accurate. What I do know is that the Universe is extremely complex and yet has so much order that it proves that there must be a Creator. 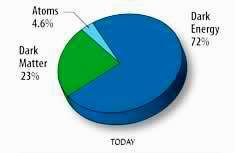 The illustration on the left is from Wikipedia in an article about dark matter and energy. The part of the universe that shows Atoms shows how much of the universe is known. The part of the universe that scientist can not see or detect with any instruments they call dark matter and dark energy. They know it is there because something is holding the universe together and causing things to move but science can not explain what “it” is based on current knowledge. Science can only detect less than 5% of the universe. The other 95% they call dark matter and dark energy. Higgs is a theory that there is a field throughout the universe of something that gives things their mass, or weight. They think that the Higgs is made of particles, like the ocean is made of water molecules. The Higgs boson would be like one particle of the Higgs. They are hoping that they can identify and understand one particle so they can understand how Higgs helps determine the mass of things. They are hopeful that this will be a great breakthrough in knowledge which will help them understand the universe better.

The more science learns about the creation the more they prove the Creator, and that the Bible is true. Science can only detect less than 5% of the universe because the physical realm is a small part of God’s creation and it is actually contained inside of the spiritual realm. The spiritual realm is much greater and more permanent than the physical realm. Some people are calling the Higgs boson the “God particle”, which many scientists do not like because they want to understand the universe without including God. Calling the Higgs boson the God particle may be more profound than they realize because God created the universe out of the substance of Himself. For of Him and through Him and to Him are all things, to whom be glory forever. (Romans 11:36 NKJV)

The Bible says: For by Him [Jesus Christ] all things were created, both in the heavens and on earth, visible and invisible, whether thrones or dominions or rulers or authorities–all things have been created through Him and for Him. He is before all things, and in Him all things hold together (Colossians 1:16-17 NASB).  This means that everything exists and holds together inside of Jesus Christ and by His power.

Notice the term “weight of glory”. In the Hebrew language one of the meanings of glory is “weight”. The glory of God fills the heavens and the earth. It may be that in the spiritual realm glory is like the Higgs field giving things their mass or weight.

Now faith is the substance of things hoped for, the evidence of things not seen. For by it the elders obtained a good testimony. By faith we understand that the worlds were framed by the word of God, so that the things which are seen were not made of things which are visible. (Hebrews 11:1-3 NKJV) The word “substance” is the Greek word “hupostasis” it means the essence of God, the reality of something not seen, the frame and foundation of something, and it also means confidence.

Who [Jesus Christ] being the brightness of His glory and the express image of His person, and upholding all things by the word of His power, when He had by Himself purged our sins, sat down at the right hand of the Majesty on high, (Hebrews 1:3 NKJV) The word person above is the same word “hupostasis”. Jesus is the essence of God the Father. Faith is the substance of God, a particle of faith is a God particle.

When we receive faith from God we are receiving Him. For we have become partakers of Christ if we hold the beginning of our confidence steadfast to the end, (Hebrews 3:14 NKJV). The word confidence in this verse is the same word again “hupostasis”. The way that we hold on to faith and see the end result is by believing. By choosing to believe God’s word we come into agreement with God. When God imparts faith into a person they receive Him; that means they receive everything needed to see the end result. God will supply matter, energy, blueprints, and confidence as needed. For by grace you have been saved through faith, and that not of yourselves; it is the gift of God, (Ephesians 2:8) Faith is a gift from God.

A person may think that faith comes from them self and they must somehow work up faith to believe in God. However, faith is a gift from God, just like everything else we receive from God it is by His grace. Our part is to believe God’s word, trust Him. But the Scripture has confined all under sin, that the promise by faith in Jesus Christ might be given to those who believe. (Galatians 3:22 NKJV) “Faith” is translated from the Greek word písteōs it is a noun, a substance. The word “believe” is translated from the Greek word pisteúsō  it means to trust or believe; it is a verb, an action on our part. When we receive faith through hearing God’s word then we connect with the promise by believing until the promise is fulfilled. Believing is how we lock onto faith and hold on to it until we see the result. Believing in God is not so much an effort on our part as it is simply trusting Him, resting in Him.

How do we receive faith from God?

So then faith comes by hearing, and hearing by the word of God (Romans 10:17 NKJV). Faith is imparted by hearing God. When you receive the Word of God you receive Him. One of the titles of Jesus is “The Word of God” In the beginning was the Word, and the Word was with God, and the Word was God. (John 1:1 NKJV) We have more about faith and hearing God’s voice at our article about Spirit Led Faith. A side note: reading is also hearing because you hear your thoughts and you hear what you are reading even if you are not speaking out loud.

The body of Christ is coming into a greater revelation of walking in the faith of God. And Jesus, answering, said to them, Have God’s faith. Truly I say to you, Whoever says to this mountain, Be taken up and be put into the sea; and has no doubt in his heart, but has faith that what he says will come about, he will have his desire. (Mark 11:22-23 BBE) The word “doubt” means separation; this means an undivided heart is required for faith to be accomplished.

Remember Jesus said what He heard the Father say, and He did what He saw the Father do. Jesus is the best example of walking in the faith of God. Our part is to come into agreement with God’s faith and believe. Then they said to Him, “What shall we do, that we may work the works of God?” Jesus answered and said to them, “This is the work of God, that you believe in Him whom He sent.” (John 6:28-29 NKJV)

And do not be conformed to this world, but be transformed by the renewing of your mind, that you may prove what is that good and acceptable and perfect will of God. For I say, through the grace given to me, to everyone who is among you, not to think of himself more highly than he ought to think, but to think soberly, as God has dealt to each one a measure of faith. (Romans 12:2-3 NKJV)

It seems that there are three levels of God’s will; “good”, the first level; “acceptable” which means well pleasing; and “perfect” meaning “the goal” and “complete”. The word “prove” above means that we are to discern and approve God’s will. That means that our mind needs to agree with God’s will, making His perfect will our goal. This is the process of renewing our mind that transforms us so that God’s will becomes our will. When we know we are in God’s will we will have the faith that God will make it happen. Now this is the confidence that we have in Him, that if we ask anything according to His will, He hears us. And if we know that He hears us, whatever we ask, we know that we have the petitions that we have asked of Him. (1 John 5:14-15 NKJV)

We know God’s will through His written word, the Holy Bible, and through the voice of the Holy Spirit in us. When God’s will is communicated to us through His Word, we also receive the faith that it is needed to make it happen.

But without faith it is impossible to please Him, for he who comes to God must believe that He is, and that He is a rewarder of those who diligently seek Him (Hebrews 11:6 NKJV). Without faith we can not please God because if God has not given His faith it means that we are trying to do our will not God’s will. It means that we have not received a Word from God and we have not received the confidence that comes from God. Whatever is not from faith is sin,(Romans 14:23).

I am not ashamed of the gospel, because it is the power of God for the salvation of everyone who believes: first for the Jew, then for the Gentile. For in the gospel a righteousness from God is revealed, a righteousness that is by faith from first to last, just as it is written: “The righteous will live by faith.”
(Romans 1:16-17 NIV)